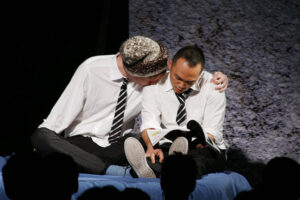 “I still have such a soft spot for this play. I had just moved back to Shanghai, my friend Christy asked me if I wanted to audition for a play because someone left it last minute. I didn’t expect the response it got —the first gay play in the city— Shanghai’s LGBT+ community was exhilarated to see itself represented on stage and the room was electric.” — Derek

Sixteen-year-old Jaime lives with his mum Sandra and her younger boyfriend in a low-rise block of flats in Thamesmead, London. Living next door is the rowdy Leah, who has been expelled from school and spends her days sunning herself and listening to Mama Cass. And on the other side is Ste, also sixteen. His father’s anger means that he often hides out in Jaime and Sandra’s flat, spending the night there to escape being beaten. Ste and Jaime start off top-and-tailing in Jaime’s bed, since there’s nowhere else to sleep, and Harvey unfolds their tentative, awkward relationship with delicacy and with joy.