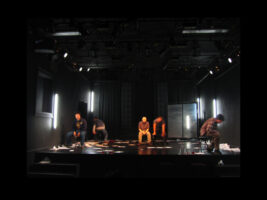 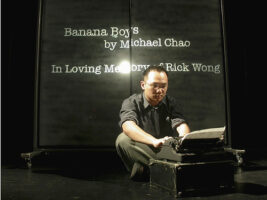 “This is the show that started it all. It was my first professional production, my first introduction to Toronto theatre, and where I met so many people whom I still work with and call friends. It also formed the basis of much of my approach to work, why I work in theatre, and what I want to put into the world.” — Derek

fu-GEN Asian Canadian Theatre Company’s first full production, Nina Lee Aquino directed this seminal work of Asian-Canadian theatre that examines the deep challenges of being torn between cultures and identities. Drawn together by the death of their friend and unofficial leader, five young Asian Canadian men must confront unrealized potential, all while trying not to punch too many white boys in the face. This wickedly funny play adapted from a celebrated book that is a “meditation for the restless”, is a call to anyone who has felt out of place in the world.

This production of Banana Boys was remounted at the 2005 Magnetic North Theatre Festival in Ottawa, Canada, and was a part of Factory Theatre’s 2005-2006 season, where it was nominated for 2 Dora Mavor Moore Awards in the General Theatre Category: