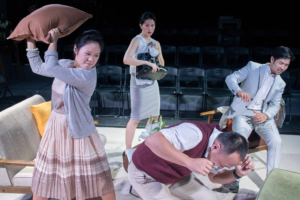 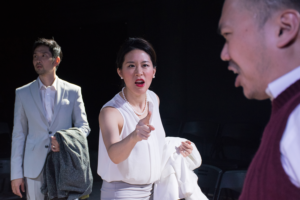 “Kwan steals the show with an empathetic portrayal of Michael, the accommodating yet frustrated wholesale shop owner. The ensemble, especially the dynamic between each respective married couple, is engaging and brimming  (yet at times overflowing) with vitality.” – Yuan-Ming Chiao, The China Post

“I was honestly left shaking my head in disbelief at how richly Hu, Kwan, Ong and Yong were effortlessly able to convey their very distinct and ever-changing characters.” –  Typing to Taipei

“Derek Kwan’s show-stealing portrayal of Michael, awkward, chittering, yet brimming with latent menace, reinforced the notion that dust was going to be kicked up.”  – James Robert Baron, The Writing Baron

“I loved the concept for this production. We made the theatre look like an apartment, with the audience seated around the perimeter. The stage in the middle was a sandbox, simultaneously a living room, a playground, a gladiatorial ring, the desert. The audience was both implicated and immersed in the action— including being showered with flower petals.” — Derek