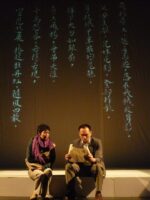 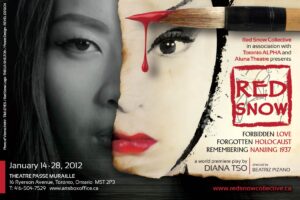 “An astonishing, almost unbelievable work, Red Snow is groundbreaking and brave. It is a stunning success. Go see it.” – Mooney On Theatre

“A graceful, moving production… both the poetic script and the impressive production are full of heart.” – NOW Magazine

“Pleasingly lyrical. Director Beatriz Pizano’s staging is lovely and delicate… as much as the play is a rebuke to brutality.” – The GRID

“This was a very moving show. It’s never easy to wrestle with the evils of the past, and this show, about the Nanjing Massacre and its far-reaching echoes, was a beautiful tribute to the power of collective healing.” — Derek

A woman’s nightmare of a Chinese opera drives her to search for her family’s silenced story. When she falls in love with a man connected to the same history, they must struggle to reconcile the past with the present. When does the enemy stop being the enemy? One woman’s search into Nanjing’s past unleashes three generations of family secrets.